Ah January… The month of new beginnings, optimistic resolutions and unbridled expectation. If December’s excesses have driven you to a new fitness regime and stringent diet (and you have thus far managed to keep on track) then I salute you. However, on this bleak Sunday, if all you crave is a generous roast dinner with a side of style then I think I may have just the pub for you. 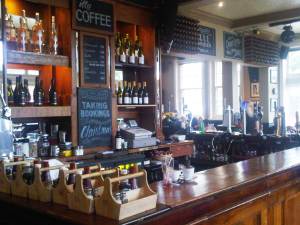 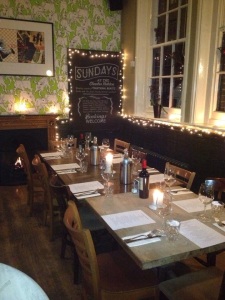 Located in SW19 (don’t be fooled by the glamorous Wimbledon postcode) the recently revamped Charles Holden pub sits just the wrong side of Tooting. But don’t let that put you off. With it’s generous portions of fresh food, spacious interior and a surprisingly good vegetarian nut roast, this is a funky little pub that’s perfect for drowning your January sorrows (yes I know it’s only the 5th, but why make life harder in the gloomiest month of the year). 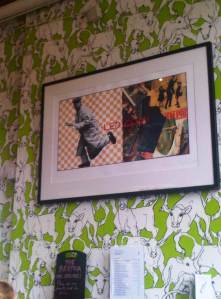 And, as I say, the Sunday roast is very good with meat and not two but three veg, plus roast potatoes, red wine gravy and a generous Yorkshire pudding. All for between £10-£13. Staff are friendly, the service is great and we didn’t have to wait too long for our food (one of my biggest bugbears with a Sunday lunch). And whilst most of my table opted for a roast, the beer battered fish and twice-cooked chips were equally delicious. As is often the norm, it’s advisable to book if you’re in a large party, but the venue is sizable so this shouldn’t be a problem. I am also told that come the summer (which currently feels like a life-time away) the beer garden is quite fabulous. So what are you waiting for? Surely a good roast doesn’t count as breaking your New Year diet? After all it’s at least 3 of your 5 a day…

A selection of their dishes including roast pork belly with all the trimmings, falafel with cous cous salad, and beer-battered fish & chips