No, I’m not referring to the cheek warming mistakes of this week’s Emmy Awards worst dressed (step up Lena Dunham), but to the dominant colour trend… a flesh toned pinky-blush as seen on January Jones, Rose Byrne and Claire Danes. 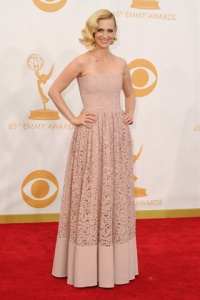 Claire was the clear winner in both the style stakes and the Awards themselves with her gorgeous embellished Armani Prive shoestring strap backless gown, complimented by a faux bob and pretty make-up.  January worked a clean silhouette cut from lace – custom made by Givenchy – and Rose channelled early 90s Kate Moss in her simple chic Calvin Klein Collection dress. 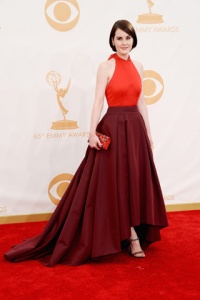 However, the palette wasn’t limited to nude.  Colour was injected by the likes of Downton Abbey’s Michelle Dockery who has exactly the right amount of elegance to pull off a red halterneck full-skirted Prada gown.  The lack of embellishment and a simple strap stiletto balanced the full skirt to perfection. Likewise simplicity ruled with Girls star Allison Williams, who opted for a classic cobalt Ralph Lauren gown that was quite simply stunning.  Black and white also made an appearance, sometimes together as per this chic ensemble worn by Homelands Morgan Saylor, or alone as seen with Robin Wright’s cap-sleeved high-neck black Ralph Lauren column. 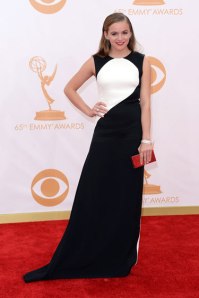 The most successful red carpet looks were those that took this season’s prevailing minimalism trend as their inspiration.  By selecting clean lines or simple strapless shapes and a lack of frou-frou, the likes of Julianna Margulies and Padma Lakshmi made others look like wedding dress meringues.  Also of note was the lack of ostentatious jewels, as this year the A-list opted for understated earrings as opposed to dramatic décolletage enhancing necklaces.

Of course if you’re young it pays to go off centre and Mad Men’s gorgeous Kiernan Shipka looked both fantastic and fashion forward in her cute Delpozo dress – a floral triumph.

This being the red carpet, there are also outfits that split the crowd. Girls star Zosia Mamet nearly got it right in this custom made dress by Honor. The inky smudgy floral print and interesting neckline were superb, but the leather bralette insert was just too overpowering and dominated the overall look.  Such a shame!  Also co-star Lena Dunham’s Prada frock was a brave choice for a red carpet venture.  The bold print and huge shape, whilst gorgeous in other circumstances, engulfed Lena and looked plain wrong amongst all the simple column silhouettes and soft hues. 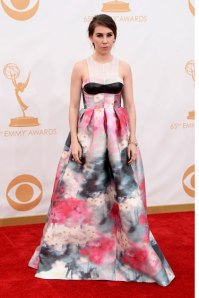 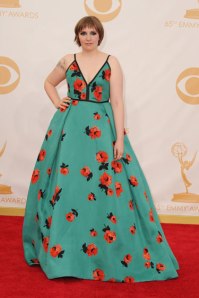 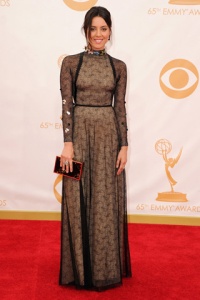 Likewise comedian Aubrey Plaza split the critics with her demure lacy Marios Schwab gown.  I’m a fan, but let me know your thoughts on this and all the other looks.  Any disputes or any stunners I’ve missed?  Or are these simply not your favourite outfits from the night.  Comments welcome.